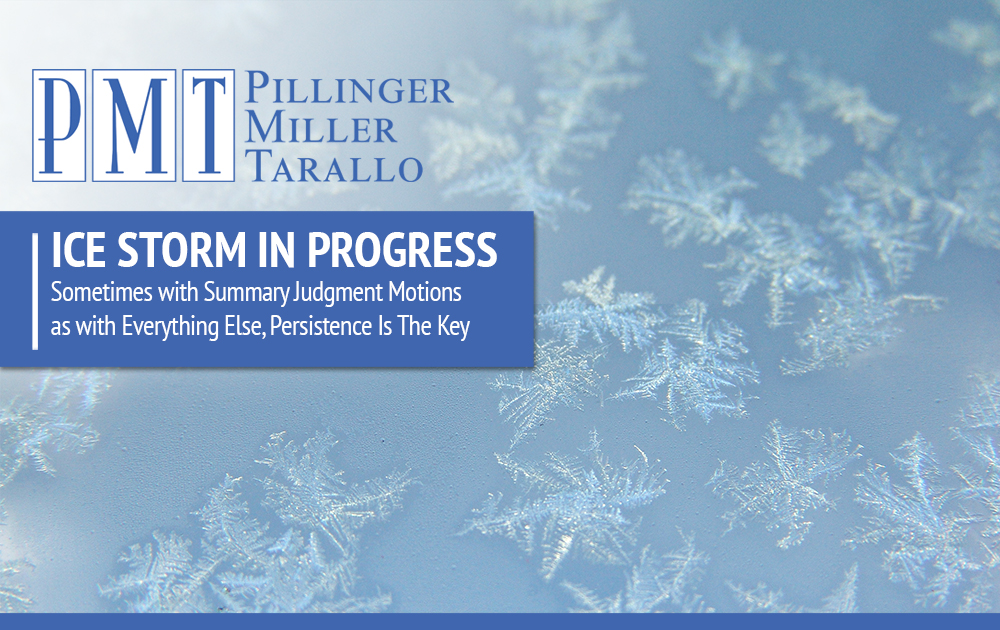 Sometimes with summary judgment motions as with everything else, persistence is the key. Unfortunately, lower courts don’t always make the correct decision and sometimes, it is necessary to make a motion to re-argue when the Court makes the wrong decision. A recent case in which Pillinger Miller Tarallo, LLP won a summary judgment for the building owner we represented, is a good example of this and how a plaintiff’s own testimony can be used to defeat her case.

In Perez v. The Pinnacle Group, plaintiff, who was a tenant in the building in the Bronx, went to the lobby where she was waiting for her son who was going to drive her to a church event on January 18, 2015, which would turn out to be one of the worst ice storms in the region’s history. While she was in the lobby, the plaintiff noticed that precipitation was falling. However, she was not aware that ice was falling. When the plaintiff’s son failed to appear, she decided to drive herself. The plaintiff exited the building and went to the parking lot where her vehicle was parked. As she reached the end of the sidewalk, she saw a ramp which led from a sidewalk to the street level and into the parking lot. The plaintiff took a step off the sidewalk onto the ramp with her right foot when she slipped. Prior to falling, the plaintiff looked down and saw small balls of ice. The plaintiff laid on the ground until two women who were nearby came over to assist her. As she lay on the ground, it continued to rain.

When she was asked what caused her to fall, the plaintiff testified that “the bad weather – – the inclement weather”. She later clarified that “[I]t was very slippery. It had to be the ice because it was very slippery”. The plaintiff could not confirm how long the ice had been there and she testified that she had used the ramp before the incident and that there was no ice on the ramp at that time. We used certified weather records from LaGuardia Airport to confirm that freezing rain began to fall at 6:20 a.m. and continued to 9:51 a.m. and the temperatures were at or near freezing during this time. Based upon the testimony and the certified weather records, we moved for summary judgment based on the storm in progress doctrine. As you may recall, the storm in progress doctrine allows a landowner sufficient time after the cessation of a storm event to reasonably maintain the premises and clear them of ice or snow.

In opposition, the plaintiff submitted the affidavit of her son and contended that defendants had constructive notice of the icy condition. The son stated that his mother had called him at the time of the incident, and he immediately went to assist her and he found her leaning against the railing of a scaffold. He noticed that the ramp was covered with patches of ice and that he had noticed the same condition for many days prior to the incident.

Clearly, the son’s affidavit contradicted the plaintiff’s sworn testimony. The lower court denied the defendant’s motion for summary judgment based upon the storm in progress doctrine as it found that the defendants had only submitted the testimony about the storm in a form of an attorney’s affirmation which would be legally insufficient. However, the Court’s ruling was incorrect since the Court had neglected to consider the plaintiff’s sworn deposition testimony and the certified weather records we introduced with the motion. Thereafter, we made a motion to re-argue which was granted. The lower court reversed itself and held that the defendants had established prima facia, and were entitled summary judgment through the plaintiff’s own sworn deposition testimony, that it was the inclement weather that caused her to fall.

The Court noted that the plaintiff testified that the ice was on the ramp as a result of the inclement weather and that the day before her fall, there was no ice on the ramp and it was not slippery. The lower court found that the affidavit of the son failed to create any material issues of fact and specifically that it created only a feigned issue of fact insufficient to defeat the motion for summary judgment as it was contradicted by the testimony of the plaintiff, his mother.

The plaintiffs appealed to the First Department. The First Department affirmed the grant of summary judgment dismissing the complaint. The First Department noted that the defendants had satisfied their prima facia burden by showing that freezing rain was falling at the time of plaintiff’s accident. The Appellate Division noted that the plaintiff testified that prior to stepping on the ramp on which she slipped and fell, she had testified that she looked down and saw “small balls of ice”. The Court noted that when asked what caused her to fall, she testified “the bad weather – the inclement weather . . . it was very slippery. It had to be the ice”.

The First Department noted that the plaintiff herself acknowledged that she did not know how long the ice had been there, that she had used the ramp the prior afternoon and that there was no ice on it at that time. The Appellate Division noted that certified weather records confirmed that the freezing rain continued to fall at 6:20 a.m., and continued until 9:51 a.m., and that plaintiff’s accident occurred approximately 10:00 a.m.

The First Department found that the plaintiff’s son’s affidavit failed to raise a triable issue of fact. The plaintiff’s argument in opposition that the defendants had constructive notice of an icy condition as alleged in her son’s affidavit was a feigned issue of fact as her son’s testimony contradicted her own testimony with respect to the presence of ice on the ramp prior to the accident. Clearly, the Appellate Division was correct on both counts as the storm in progress precluded any remedial efforts that would be required before a landowner could be held liable. The Appellate Division also noted that the affidavit of the son was submitted solely to create a feigned issue of fact since the son’s testimony was offered in opposition to the motion for summary judgment and contradicted his mother’s own testimony, that ice was falling at the time of the accident.

This case highlights several important points. First, it is always necessary to ask a plaintiff if he knows what he slipped on. Often times the plaintiff does not really know and is just guessing, using words like “it felt like, or it had to be. . .”. Those are obvious guess words which can be used to make a motion for summary judgment on the basis that the plaintiff does not know what caused her to fall and is merely speculating as to the cause of the fall.

Third, it is always helpful when a witness submits an affidavit in opposition to summary judgment who was not deposed. These witnesses often provide contradictory facts which a plaintiff will use to try to create an issue of fact. For the defense attorney, this is a golden opportunity to show the Court that this is a “feigned” issue of fact which should be disregarded.

Cases like this need to be aggressively defended to make plaintiffs prove their case.