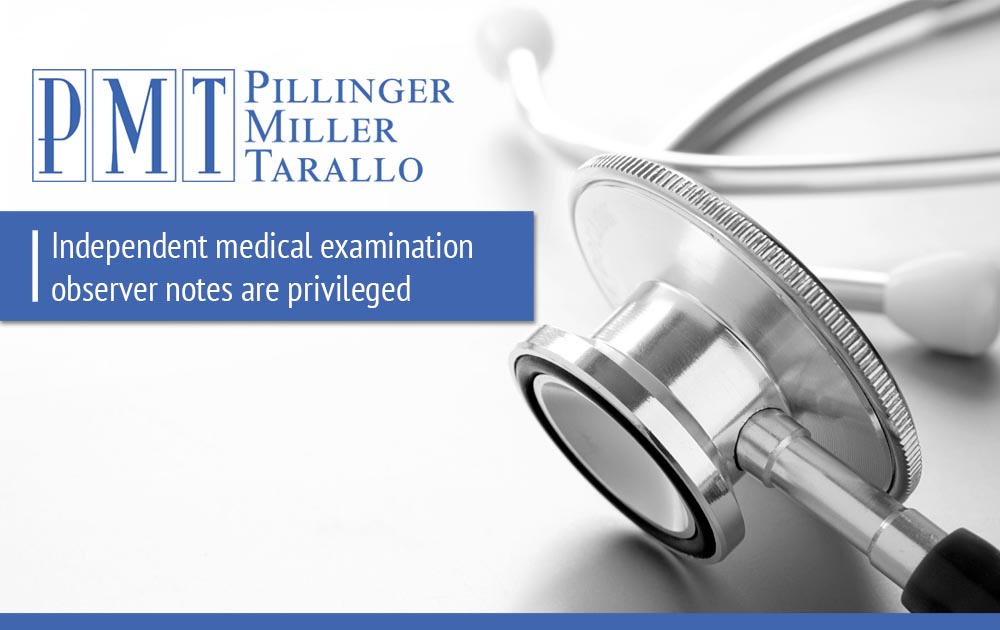 The First Department, Appellate Division, in March 2019, addressed an issue of the first impression and ruled that notes created by an observer of an independent medical exam (hereinafter “IME”) performed on an injured plaintiff are not discoverable because they are protected by the prepared-for-litigation privilege.  Markel v. Pure Power Boot Camp, Inc., 2019 NY Slip Op 02049 (2019).

The Court indicated that this question needed to be addressed because of confusion in the lower Courts.  This decision was intended to “clarify whether, and under what circumstances, such materials are protected from disclosure.”  The Court in Markel examined this issue in the context of a case “which a personal-injury plaintiff had moved to quash the defendants’ subpoena duces tecum seeking IME observer notes.”

In making their decision, the Court discussed the Plaintiff’s control and choice over the IME observer.  The purpose of IME observer is to “deter examining doctors hired by defendants from inquiring about matters beyond the scope of the particular action and keeps the IME process honest.”

In Markel, Plaintiff alleged that she was forced to complete unsafe exercise practices at a gym owned and operated by Defendant, which caused her to become seriously injured.  Plaintiff alleged “serious, lasting and permanent injuries to her knee, among other injuries” and received medical treatment, including surgery.

The First Department panel reversed the 2017 decision of the Supreme Court wherein the Court denied Plaintiff’s motion for a protective order to quash a subpoena duces tecum served upon the IME observer who accompanied the plaintiff to the exam performed by the Defendant’s orthopedist.

The Appellate Division noted that there was no claim made that the IME observer qualifies as an expert.   Additionally, “defendants do not identify in this record any information related to the plaintiff’s IME that they cannot obtain from their own examining doctor.”  The Court conceded that “the information contained in the IME observer’s notes would generally be considered material and necessary for the prosecution or defense of the underlying action” pursuant to CPLR 3101(a).

While the IME observer’s notes would not be protected by attorney-client or work-product privilege, considering the fact that the materials were prepared in anticipation of litigation, they would fall under the qualified privileges pursuant to CPLR 3101(d)(2).  These materials may only be obtained by “a showing that the requesting party has a ‘substantial need’ for them in the preparation of the case and without ‘undue hardship’ the requesting party is unable to obtain the substantial equivalent by other means.”

The First Department concluded in this case that the IME observer was “hired to assist the Plaintiff’s attorney in advancing the litigation and preparing for trial.”  Also, that the Defendant did not show that there was any “substantial need for the IME observer’s notes…or why they are unable, without undue hardship, to obtain the ‘substantial equivalent’ of the materials by other means.”  What was crucial to the Court’s analysis was that the Defendant’s doctor conducted the examination, and could provide the defendant with information of what generally occurred.

The Court noted that under circumstances such as these, the “defendants’ access to their own doctor will seriously undermine any argument that there is a substantial need for the IME observer’s materials because the information contained therein is not otherwise available without undue hardship.” Citing, Cornex v. Carisbrook Indus., 161 A.D.2d 376 (1990).

What is interesting to note is that at the end of the opinion, Judge Gische emphasized that “we are not deciding whether a different result would obtain were the IME observer expected to be, or actually is, called as a witness at any time during the case.”

If you wish to discuss this further, please feel free to contact us.