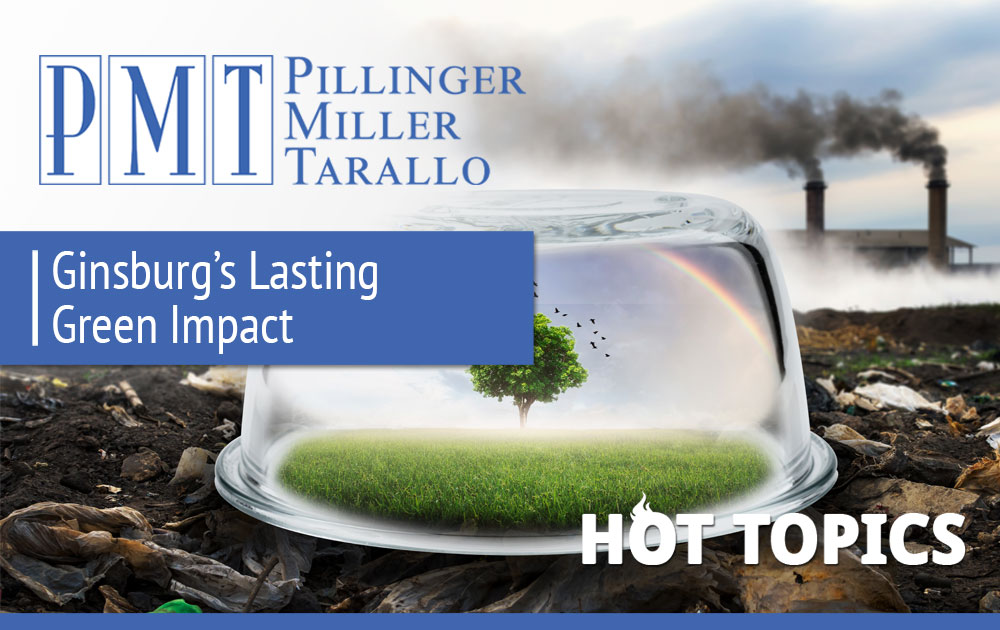 After a feverish battle with cancer, in the late evening of September 18th 2020, Ruth Bader Ginsburg passed away. Ginsburg leaves a lasting legacy on environmental jurisprudence. Ginsburg in her opinion in the 2000 case, Friends of the Earth v. Laidlaw, 528 U.S. 167, established a test for individual plaintiffs to have standing to bring suit in order to compel enforcement of federal environmental rules. Ginsburg wrote in her opinion that while the plaintiffs did not have personal injury, there was still injury in the form of reasonable concern  about the effects of pollution, “directly affecting those affiants’ recreational, aesthetic, and economic interests”.

Further, one of the most well-known cases is the 2007 landmark case, Massachusetts v. EPA, 549 U.S. 497. In a 5-4 decision, the Supreme Court found that the Environmental Protection Agency has the authority to regulate greenhouse gas emissions, such as carbon dioxide, stemming from motor vehicles as “air pollutants” pursuant to the Clean Air Act. This was the Supreme Court’s first ever ruling on the issue of climate change, and subsequently led to the Obama Administration establishing emission standards for motor vehicles in 2009. Moreover, this case established that plaintiffs may allege injury caused by climate change and have standing in Federal Court based on Article 3. Previously, environmental cases sought by citizens were thought to lack injury and standing, as seen in the dissenting opinion, where potential injuries from global warming were labeled as not individual and personal.

Ginsburg’s vote was not easily handed over, as above all else she valued the legal merits of arguments. In 2011, eight states, New York City, and three environmentalist groups filed a lawsuit under federal common law alleging that utility companies located in 21 states created a public nuisance due to their contribution to climate change through their carbon dioxide emissions. Ginsburg delivered the majority opinion of the lawsuit, American Electric Power v. Connecticut, 563 U.S. 410, stating that there was no merit to their claim under federal common law. While Ginsburg clearly sympathized with their cause and offered possible relief though the Clean Air Act only, the argument lacked legal merit.

Justice Ginsburg’s decisions in the area of environmental law have had a tremendous impact on all our lives.