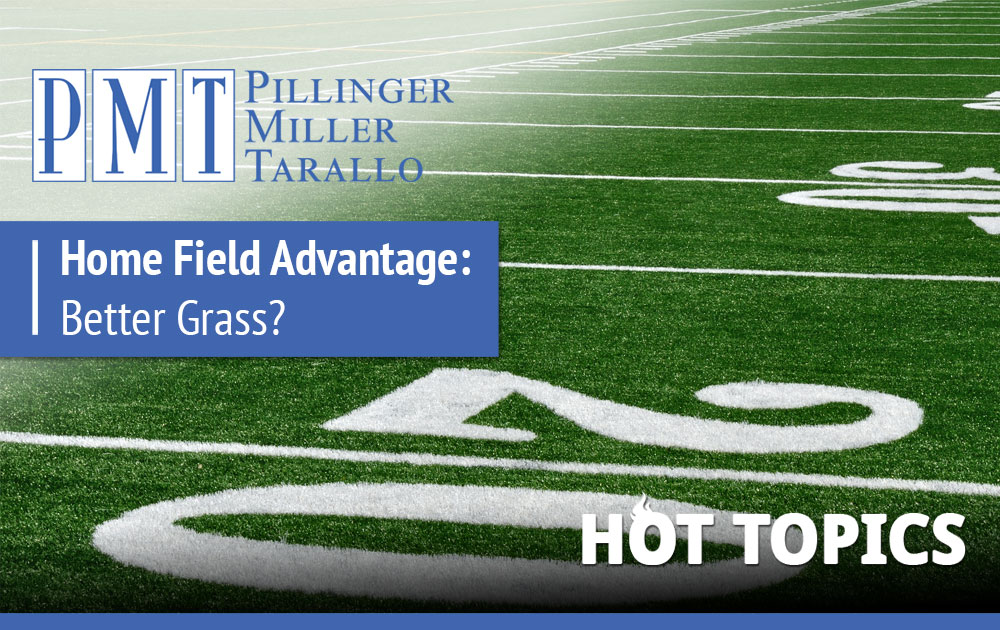 Formerly known as “ChemGrass,” artificial turf was first invented in 1964 by Monsanto. After its installation in Houston’s Astrodome in 1966, artificial turf gained the famous moniker “AstroTurf.” By the early 2000s, AstroTurf developed into what many people recognize today, along with the infamous turf beads.

Anyone who has had contact with a turf field knows its turf beads and their proclivity for being found in every nook and cranny. With the ability to stick to clothes and skin, contact with a turf field can have hundreds of the beads clinging to you. The turf beads are actually “crumb rubber,” tiny black crumbs created by recycling old car tires that give stability to the fake grass and provide shock absorbency for athletes who fall, such as soccer goalies, helping prevent serious injuries. Today, recycled tire material is not limited to turf fields. It is also used as an alternative pavement for running tracks and playgrounds.

This method of recycling was invented in response to an environmental crisis. According to the Environmental Protection Agency, the illegal dumping of tires in the 1990s posed a massive risk to the environment and eventually caused toxic fires that burned for months. Approximately 20,000-40,000 tires are recycled for every turf field, with about 12,000 – 13,000 turf fields in the U.S. and 1,200 – 1,500 new installations each year. The math is easy; turf fields prevent millions of tires from entering landfills and illegal dumping that causes environmental harm.

In 2009, a women’s soccer coach for the University of Washington noticed a trend of soccer players diagnosed with cancer, specifically goalkeepers. The coach raised concerns about the possibility that turf beads were causing cancer, which would take traction among parents and politicians alike, posing the possibility of impending lawsuits.

This association was made due to the chemicals used in tires, says Darren Gill, vice president of marketing for FieldTurf, a famous turf company.

When people look at the ingredients that go into a car tire, such as benzene, some people take the elements and turn them into health concerns. This association is misconstrued, although, and Gill contends to the safety of turf fields, “after the vulcanization process, those ingredients are inert.”

In 2015, a study by the Yale School of Forestry and Environmental Studies confirmed the presence of known or suspected carcinogenic chemicals in some crumb rubber samples, but this was never up for question. It has always been well established that crumb rubber contains carcinogens. The Yale study did not address the concentrations or conditions needed to produce hazardous chemicals that would harm human health.

The New York Department of Health answered this question. It published a study in 2018 concluding that even when crumb rubber releases chemicals, “ingestion, dermal or inhalation exposures to chemicals in or released from crumb rubber do not pose a significant public health concern.” The studies exploring the chemical exposure potential of crumb rubber involved extraction methods using powerful acids or solvents under extreme conditions. The methods of these studies used to report the presence of chemicals are not representative of the human body’s needs. They, therefore, cannot be used to portray potential health risks accurately.

Despite being established that crumb rubber has the potential to contain carcinogens, numerous studies from various organizations and agencies have shown these chemicals are not at levels high enough to pose a risk to athletes or children. In addition, the Synthetic Turf Council has compiled more than 75 relevant studies that show the carcinogenic chemicals are not readily released or absorbed during the use of turf fields.

Multiple investigations from litigators, politicians, and scientists have conducted studies attempting to verify the causal link between exposure to crumb rubber and elevated cancer risk. The lack of causal evidence has not kept the issue out of court, though. In 2015, the Sierra Club brought a lawsuit against the City of San Francisco, challenging an agency finding that the cancer risk from turf fields is de minimis. The Court of Appeals denied this claim, as the Sierra Club could not present new or conflicting data or opinions that would cause concern that the City may not have thoroughly evaluated the cancer risks. There has yet to be any definitive scientific data to prove Sierra Club’s claims even in 2021.

Nevertheless, multiple class-action lawsuits are still investigating the link between exposure to turf and cancer to find new or conflicting data. While none have yet to see a win in court, the turf industry remains under immense scrutiny. Without a definitive link between the two, class action lawsuits will have their day in court, another day.