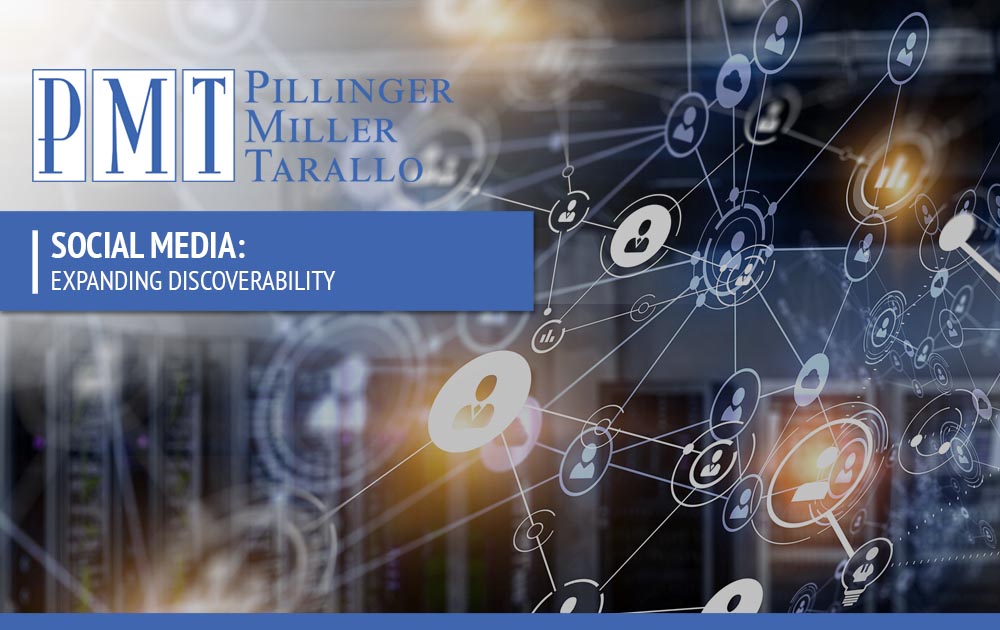 Social media such as Twitter, Facebook, Myspace and LinkedIn have become major resources in the legal world. Lawyers have found that these resources can provide accurate information as to potential litigants’ background, history, the seriousness of injury or level of disability. The law around the discoverability and use of these social media platforms is recent and relevant as the world is continuously shifting to fast-paced social networking. The information sought on these social platforms cannot only be useful for finding litigants, but also for strengthening a defense as to the extent of personal injuries claimed.

It is no longer the norm that only major companies have to preserve electronic data for litigation. Plaintiffs in personal injury actions now also have to preserve social media platforms as the information contained therein can be highly relevant and useful for the defense of a case. Use of E-discovery is broadening as society becomes more immersed in social media and the online world.

Recent decisions have held that when a person puts their mental or physical health in question, social media platforms can be very useful and determinative in the outcome of a case. Counsel can use law mechanisms such as notices to admit, motions to compel, and discovery demands to extract such information that is necessary and relevant to the cause of action.

In a recent ruling, Vasquez-Santos v. Matthew, Appellate Division, First Department, opened the door even further for Defendants and granted a motion to compel to allow an expert to dive through the plaintiff’s electronic devices, including through email accounts and other social media platforms, and for deleted materials, tags and documents. The court held, “Order, Supreme Court, New York County (Adam Silvera, J.), entered June 7, 2018, which, to the extent appealed from as limited by the briefs, denied defendant’s motion to compel access by a third-party data mining company to plaintiff’s devices, email accounts, and social media accounts, so as to obtain photographs and other evidence of plaintiff engaging in physical activities, unanimously reversed, on the law and the facts, without costs, and the motion granted to the extent indicated herein.” Vasquez-Santos v. Mathew, No. 158793/13, 2019 WL 302266 (N.Y. App. Div. Jan. 24, 2019).

The Court of Appeals also opened the door to discovery of social media in the case of Forman v. Henkin when they held that “New York discovery rules do not condition a party’s receipt of disclosure on a showing that the items the party seek actually exist; rather, the request need only be appropriately tailored and reasonably calculated to yield relevant information. Indeed, as the name suggests, the purpose of discovery is to determine if material relevant to a claim or defense exists”. The Court went on to say that, “even private materials may be subject to discovery if they are relevant……when a party commences an action, affirmatively placing a mental or physical condition in issue, certain privacy interests relating to relevant medical records—including the physician-patient privilege—are waived”.  For purposes of disclosure, the threshold inquiry is not whether the materials sought are private, but whether they are reasonably calculated to contain relevant information. Forman v. Henkin, 30 N.Y.3d 656, 666, 93 N.E.3d 882, 890 (2018).

Please note that Courts have held that “the defendant must establish a factual predicate for said request by identifying relevant information in plaintiff’s [social media] account, such as information that contradicts or conflicts with plaintiff’s alleged restrictions, disabilities, losses, and other claims” (see Tapp v. New York State Urban Dev. Corp., 102 AD3d 620).

In conclusion, Social Media platforms should be preserved as if the Plaintiff was a business preserving their electronic data. Social Media can be highly relevant and discoverable when there is a showing it may impact the outcome of the case and when it is likely to lead to relevant and non-privileged information. Our office serves, in every case, along with our Answer, a “Demand for Preservation of Evidence” and a “Demand for Authorizations for Cellular Phone and Social Networking Records” in order to gain access to social media information and data.

While the law around the discoverability of Social Media platforms is new and developing, it is important to keep in mind that in today’s world where a significant portion of a person’s life is documented online, there is a strong possibility the information sought will be highly relevant to the outcome of the case.