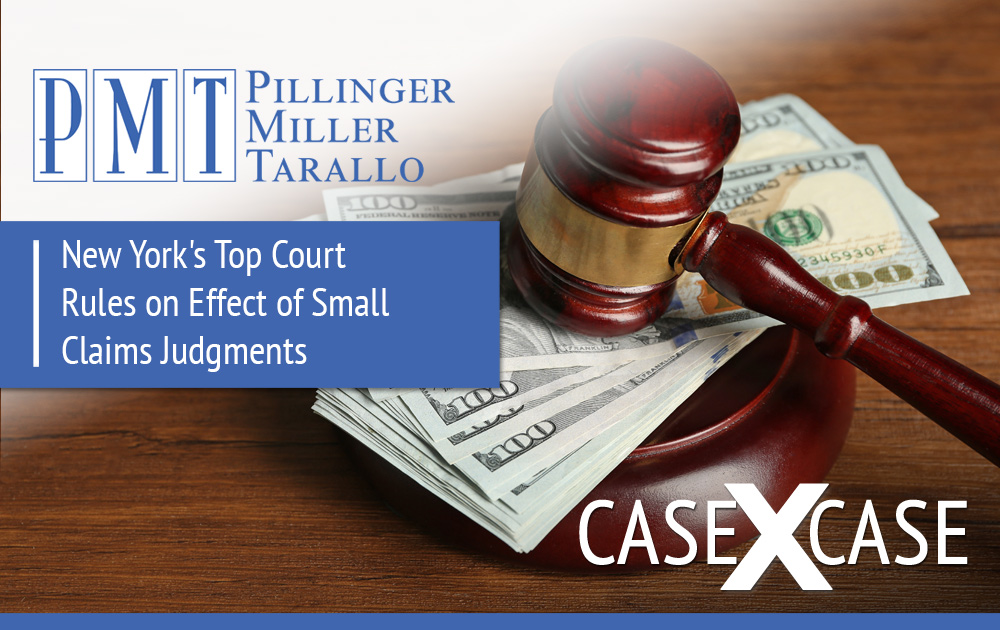 New York’s Court of Appeals examined a novel question presented to it by a Federal Appeals Court: what is the effect of a judgment in small claims court in subsequent litigation between the same parties on the same issues? The answer is vital to both plaintiffs and defendants.

Then plaintiff sued the same defendant in Federal Court, seeking additional damages for the defendant’s failure to pay her overtime wages in violation of Federal and State law. Defendant moved to dismiss that suit under the doctrine of res judicata. The Federal Court dismissed the suit, and the plaintiff appealed to the Second Circuit Court of Appeals. The Federal appeals court “certified the question” (i.e., referred it to NY Court of Appeals) for a ruling on what the effect a New York City Small Claims judgment has on subsequent litigation between the same parties on the same issues.

The Court of Appeals ruled that Small Claims judgments “may have the traditional res judicata or claim preclusive effect in a subsequent action involving a claim between the same adversaries arising out of the same transaction or series of transactions at issue in a prior small claims court action.”

Section 1808 of the Civil Court Act, which governs small claims judgments, “is not a paragon of clarity,” explained the Court. In particular, it begins by stating that a small claims judgment is not preclusive of any fact litigated in a subsequent lawsuit. However, it then goes on to carve out an exception where “a subsequent judgment obtained in another action or court involves the same facts, issues, and parties.” This creates an ambiguity, the Court stated.

Under res judicata or claim preclusion, “once a claim is brought to a final conclusion, all other claims arising out of the same transaction or series of transactions are barred, even if based upon different theories or if seeking a different remedy,” held the Court. To determine whether two claims arise out of the same transaction or series of transactions, “we have held that courts should analyze whether the claims turn on facts that are related in time, space, origin, or motivation, whether they form a convenient trial unit, and whether their treatment as a unit conforms to the parties’ expectations or business understanding or usage.”

The Court explained the distinction between relitigating facts and relitigating claims: a claim may involve other facts beyond those previously litigated.

“Consequently, a small claims judgment may preclude a subsequent claim between the same adversaries arising out of the same transaction or series of transactions as the prior action.”

Comment: As the Court of Appeals pointed out, many claimants use the Small Claims court as a quick and inexpensive way to collect small amounts of money on claims. This may have more significant implications, and therefore they should be given considerable latitude in pursuing more prominent aspects of their claim after recovering a small cash award. But as the dissent noted, the price a plaintiff may pay for a quick cash infusion may be to forfeit much larger benefits that were beyond the jurisdiction of the Small Claims court.

What about defendants and their counterclaims? According to the few court cases on the subject, a Small Claims defendant’s counterclaims are barred in future litigation only to the extent that they are identical. See, e.g., 64 W. Park Ave. Corp. v. Parlong Realty Corp. (77 Misc 2d 1019).

But the distinction between a Small Claims action and a future case in a higher court may contain no bright lines. In fact, in the Simmons case, the plaintiff’s Federal court action was based on a different legal theory (violation of Federal and State law) than her small claims case, which was simply an unpaid-wage claim.

A warning to plaintiffs: before suing in Small Claims court, consider that you may be forfeiting all other claims against the defendant.