Case by Case: SEC Penalties Against Brokerage Firms May Be Insurable 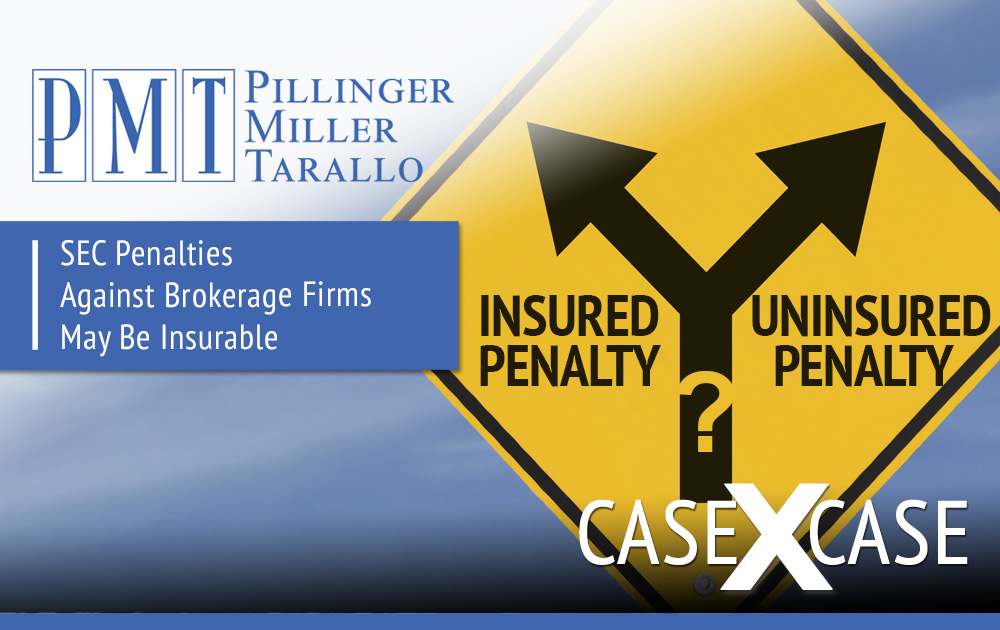 New York’s Court of Appeals has ruled that regulatory actions by the SEC against brokerage firms may be covered by their insurance policies, depending on whether those actions are “disgorgements of profits” or “penalties.”

The Bear Stearns firm was insured for “loss” that it became liable to pay in connection with any civil proceeding or governmental investigation into violations of laws or regulations, defining “loss” as including various types of damages—including compensatory and punitive damages (“where insurable by law”)—but not “fines or penalties imposed by law.”

Bear Stearns turned to its insurers for coverage, and they disclaimed; this lawsuit followed. The Insurers moved to dismiss the complaint arguing, among other things, that the disgorgement component of the SEC settlement was not insurable as a matter of public policy. Supreme Court granted summary judgment to Bear Stearns; the Appellate Division reversed; and the Court of Appeals reversed again, finding for Bear Stearns.

The Court of Appeals held, first, that the $160 million disgorgement agreement was “not a penalty within the meaning of the policy.” The Court looked to the policy’s definition of “loss.” Under the relevant policies, the Insurers agreed to pay all “loss” which Bear Stearns became legally obligated to pay as the result of any claim, which was defined as including any civil proceeding or governmental investigation, for any wrongful act, which encompassed any actual or alleged act, error, omission, misstatement, neglect, or breach of duty by Bear Stearns and its employees while providing services as a securities broker and dealer.

The policies defined “loss” as compensatory damages, punitive damages insurable by law, multiplied damages, judgments, settlements, costs, and expenses resulting from any claim. Further, “loss” expressly encompassed “costs, charges, and expenses or other damages incurred in connection with any investigation by any governmental body.” However, an exception in the definition of “loss” provided that “loss” shall not include “fines or penalties imposed by law.”

Although the policy limit on the definition of “loss” as exempting “penalties imposed by law” was contained in the coverage section, the carve-out excepting specific “penalties” from coverage “amounts to an exclusion because absent that language, the definition of loss would otherwise encompass such payments.” Because the question here involves exclusion from coverage, the insurers had to demonstrate “that a reasonable insured purchasing this wrongful act policy in 2000 would have understood the phrase ‘penalties imposed by law’ to preclude coverage for the $140 million SEC disgorgement payment. The Insurers, held the Court, did not meet this burden.

The phrase “penalties imposed by law” was not defined in the insurance policies. However, the term “penalty,” the Court stated, “is commonly understood to reference a monetary sanction designed to address a public wrong that is sought for purposes of deterrence and punishment rather than to compensate injured parties for their loss.”

While the term “penalty” is still not defined under New York law, the Court held that “a reasonable insured purchasing a wrongful act policy would expect an award or settlement payment that has compensatory purposes and is measured by an injured party’s losses and third-party gains to fall within its coverage grant and, concomitantly, not be deemed a penalty.” Thus, at the time Bear Stearns bought the insurance, “a reasonable insured would likewise have understood the term ‘penalty’ to refer to non-compensatory, purely punitive monetary sanctions.”

Turning to whether the $140 million paid by Bear Stearns constituted a penalty, the Court reasoned that Bear Stearns demonstrated that the $140 million disgorgement payment was calculated based on wrongfully obtained profits as a measure of the harm or damages caused by the alleged wrongdoing that Bear Stearns was accused of facilitating. This contrasted with the $90 million payment denominated a “penalty,” which was not derived from an estimate of harm or gain flowing from the improper trading practices and was explicitly designated as a penalty for tax purposes.

Comment: In sum, then, the Court of Appeals considered the “penalty” exclusion under the prevailing standard for insurance policies: the reasonable expectations of the insured versus the burden on the insurer to prove that the loss falls within the exclusion. To be sure, there is more than one way to analyze this case, as demonstrated by the fact that the Appellate Division reversed the Supreme Court and that the Court of Appeals was split in its decision.

The issue was complicated because the insurance policy in question explicitly insured Bear Stearns for losses stemming from government investigations into its wrongful acts as a broker. Obviously, the policy was meant to cover some monetary sanctions imposed on Bear Stearns. To hold that all sanctions are excluded penalties would have rendered the policy virtually meaningless. So the Court makes new law here by drawing a distinction: sanctions based on profits and losses are covered, while fines consisting of an arbitrary dollar amount are not.