HOT TOPICS – What Is the Correct Choice of Law for An Interstate Trucking Accident? 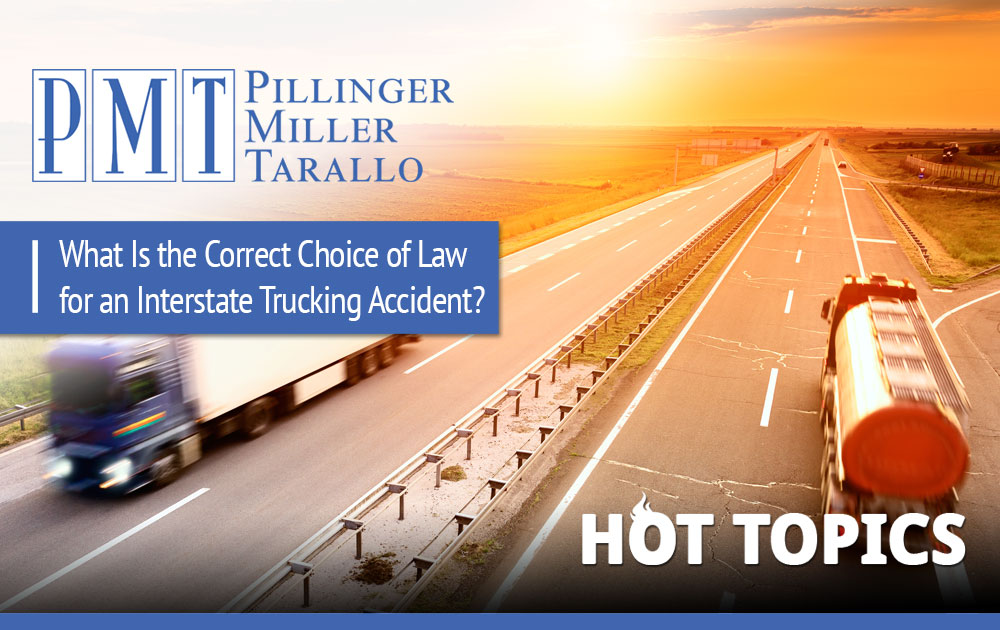 In 1633, Galileo was summoned by the Inquisition to answer a charge of heresy based on his teachings that the Earth moved around the Sun. This belief was contrary to the existing Church doctrine that the Earth was the center of the universe and did not move.  Faced with the possibility of torture and being burned at the stake, Galileo recanted his view that the Earth moves. But as he left the building, he was heard to mutter, “Nevertheless, it moves.”

What also moves?  Trucks. Lots of them. As of 2020, there were nearly a million for-hire carriers and 800,000 private carriers registered with the Federal and State governments. There are 36.9 million commercial trucks on America’s roads, plus 3.9 million Class 8 trucks (including tractors and straight trucks).  72.5% of all domestic tonnage moves by truck.

And trucks move a lot. They racked up nearly 305 billion road miles in 2018, including 184 billion miles for combination trucks. All these trucks are driven by 3.6 million truck drivers plus 7.9 million people in trucking-related jobs. (Source: American Trucking Association web site: trucking.org).

And with trucks, go motor vehicle accidents.  Because trucks tend to cross State lines more often than private passenger vehicles, motor vehicle accidents involving commercial trucks involve people from more than one State. And when lawsuits result from accidents, the question of proper venue frequently arises, as does the choice of which State’s law to apply.  This article will examine how New York courts determine the choice of law for a trucking accident.

Until 1963, New York courts followed a simple rule: the correct choice of law for a lawsuit is the State where the accident happened.  Then in 1963, New York’s Court of Appeals decided that the old rule “failed to accord any significance to the policies underlying the conflicting laws of other jurisdictions,” so, in Babcock v. Jackson, 12 NY2d 473, New York adopted a new parameter for choice of law: the “center of gravity” test, also called the “grouping of contacts” approach. In the Babcock case, the Court ruled that New York law should apply to a New York driver and passenger who were in an accident in Ontario; while New York law permitted the passenger to sue the driver, Ontario law did not (due to its “guest statute”).

New York’s Court of Appeals further refined its choice of law rule in 1972 in Neumeier v. Kuehner, 31 NY2d 121, crafting the set of rules which still apply today, called the Neumeier rules.  There are three parts to the Neumeier Rules:

Neumeier Rule 1: When the driver and passenger are domiciled in the same State, and the vehicle is registered there, the law of their shared jurisdiction controls.

Neumeier Rule 3: In all other situations, the law of the State where the accident occurred governs unless “it can be shown that displacing that normally applicable rule will advance the relevant substantive law purposes without impairing the smooth working of the multi-state system or producing great uncertainty for litigants.”

Both Babcock and Neumeier involved “guest statutes,” which prohibit passengers from suing their drivers. But the Neumeier Rules now apply in all tort cases, not just motor vehicle accidents.

Determining which State has the “greatest interest” in the outcome of litigation — and thus whose law should apply — can be complex. Many cases do not fit neatly into any category.  For example, in King v. Car Rentals Inc., 29 AD3d 205 (2d Dept 2006), Ali rented a car in New Jersey from Avis, a Delaware corporation that does business in New York. Ali drove to Connecticut, where he picked up King. The two went to Canada and had a one-car accident in Quebec. Both Ali and King had part-time residences in New York.  King sued Ali and the rental car company in New York.

The Appellate Division found that this case did not fit neatly into any of the three Neumeier Rules. It found that plaintiff was a domiciliary of New York because the more significant part of his contacts was there. Ali was also deemed a New York resident because, despite his extensive contacts with New Jersey, he intended to reside permanently in New York. And Car Rentals Inc. was a New Jersey domiciliary, doing business as a licensee of Avis.

The Court ruled that Quebec law was ruled out because aside from happening to be the place of the accident, none of the parties had ties to Quebec. Therefore Quebec had no “interest” in the outcome of this case. The Court then examined the differences between NY and NJ’s laws on the vicarious liability of vehicle owners. It ruled that even though New York has a strong interest in holding vehicle owners vicariously liable, New Jersey, the residence of the car rental company, had a greater interest in protecting its domiciliary.  The Court noted that by making this ruling, it was relying on the “unless” provision in the third Neumeier Rule, which, as you can see, is wide open to interpretation.

The complexity of these multi-State motor vehicle accidents usually results in appeals and reversals of trial court decisions. In Edwards v. Erie Coach Lines, 17 NY3d 306 (Court of Appeals 2011), a charter bus carrying members of an Ontario women’s hockey team plowed into the rear end of a tractor-trailer parked on the shoulder of a New York highway. Three bus passengers and the tractor-trailer’s driver died; several bus passengers were seriously hurt. The charter bus driver, employer, and the company that leased the bus were Ontario domiciliaries, as were all the injured and deceased passengers. The tractor-trailer driver was a Pennsylvania domiciliary, as were his employer and the companies that hired the trailer. The accident occurred in New York, and this appeal consolidated six different lawsuits.

But the Pennsylvania defendants, owner, and driver of the tractor-trailer did not benefit from the Ontario cap on damages. As the Court held, the third Neumeier Rule establishes the place of the tort—here, New York—as the “normally applicable” choice in a conflicts situation such as this one, where the domicile of plaintiffs, the domicile of the trailer defendants, and the place of the tort are different.

In motor vehicle accidents involving parties from different States, New York considers the choice of applicable law separately regarding each plaintiff vis-a-vis each defendant.  Plaintiffs and defendants from the same State (or province) will likely have the law of that State or area apply to them. Where plaintiffs and defendants are from different States, the differences in their home State’s laws have to be analyzed to see which State has the “greatest interest” in the outcome. And where there is no significant difference in State laws, New York law applies. Importantly, every multi-state accident situation requires an individual analysis because the application of New York’s choice of law rules is so complex that the decisions of the trial courts are frequently overturned on appeal.