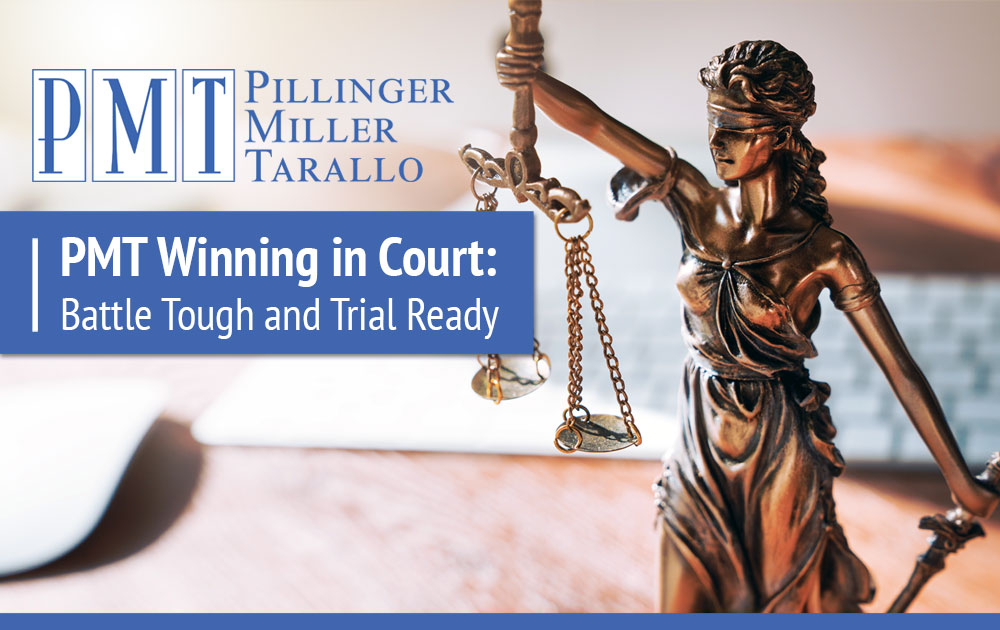 What makes a successful trial attorney? There are many people who are able to try cases, but there is a huge difference between trying a case and winning a case. Winning a case requires special skills that not everyone has. Among the skills needed are creativity and confidence. To successfully represent the client’s best interests, it is necessary to be able to see all the strengths and weaknesses of the evidence in the case. Then, develop a big picture so that a compelling story can be told to the jury. Jurors expect to hear a client’s side of the case and the top trial attorneys are able to craft an explanation or a reason why your client is not responsible. What makes our PMT trial attorneys so effective is it they search for and find that creative story and then confidently present it to the jury.

This month we highlight two cases which our PMT trial attorneys successfully tried to defendants’ verdicts. These cases demonstrate the creativity and confidence that make our attorneys the best in the business.

On April 13, 2016, Sue Ann Frias, a 68 year old woman, fell on the Q24 bus of the New York City Metropolitan Transit Authority because of an alleged unusual and violent sudden stop by the bus driver near the intersection of Atlantic and Rockaway Avenues.  The plaintiff claimed that due to the negligence of the bus driver, she fell on the bus and severely injured her hip. The MTA claimed that the bus driver brought the bus to a safe stop and that the plaintiff fell on her own before anyone else on the bus moved because she was unstable due to a recent car accident.  We also argued that the plaintiff did not properly safeguard herself by walking on the moving bus, was not sitting or holding onto a pole or railing.  There was video showing the movements and actions of the passengers, including the plaintiff.

On the date of the accident, plaintiff had a sling on her left arm.  We showed that plaintiff had been involved in a car accident 18 days before the bus accident where her car flipped 3 times and she fractured her shoulder.  She was considered injured/disabled and we convinced the judge to charge the jury regarding the duty that a disabled person has to act like a reasonably prudent disabled person as well as the duty owed by the bus driver toward a person who was disabled.  The judge also charged the jury about sudden stops which require an unusual and violent stop or jerk.  The Pattern Jury Instruction 2:165 used the terms “unusual and violent” 3 times and “unusual or sudden” once.  We argued that the charge as written was confusing and inconsistent and that the charge should reflect the case law that requires the stop to be unusual and violent.  The judge agreed with our interpretation and modified the charge.

The jury came back with  6-0 defense verdict in 19 minutes.  The jury added a note that “The bus driver was not negligent” .

Since the trial, Mr. Buchman notified the publishers of the inconsistency and they agreed with Mr. Buchman and have amended PJI 2:165.

Plaintiff’s injuries:  Fractured hip with eventual hip replacement and a second surgery for revision of the hip replacement.  Plaintiff had 30 days of physical therapy and a Medicaid lien of $120,000.

On December 6, 2019, following a three week jury trial, Richard Freire of Pillinger Miller Tarallo obtained a defense verdict before Judge Frank Nervo in Supreme Court, New York County in the case of Murphy v. El Dorado Realty, et al. Plaintiff Esther Murphy allegedly tripped and fell on an approximately 2cm difference in elevation at an expansion joint between two sidewalk flags on September 10, 2010. The expansion joint was located at or about the property line between two commercial properties and thus both abutting owners were defendants in the case. As a result of the alleged accident, plaintiff sustained a fractured elbow, fractured foot and lower back injuries for which she underwent four surgeries including a lumbar fusion. At the time of trial plaintiff was confined to a wheelchair.

Plaintiff claimed the PMT defendants had an outdoor cafe with seating in front of its premises on the date of plaintiff’s accident which violated applicable codes and infringed on the available walking space for pedestrians, creating a funneling effect toward the expansion joint. Plaintiff also claimed the PMT defendants added concrete to an adjacent tree well after the accident to alleviate the issue and create more walking space on the sidewalk. At trial, Mr. Freire conclusively demonstrated his clients did not have a sidewalk cafe on the date of her accident and successfully moved in limine to preclude any evidence of the subsequent remedial measure to the adjacent tree well. As a result, plaintiff’s counsel abandoned the cafe theory at trial and focused his case against the co-defendant. During closing arguments, Mr. Freire argued the elevation differential at the expansion joint was reasonably safe, using a ruler to show the minimal nature of the alleged 2 cm difference in elevation. In particular, Mr. Freire during his closing used the ruler to show the jury it had safely walked over a power cord on the courtroom floor (set up by plaintiff’s counsel for his audio/visual equipment) with approximately the same 2 cm height off the floor. The jury deliberated for only 35 minutes before returning a defense verdict.